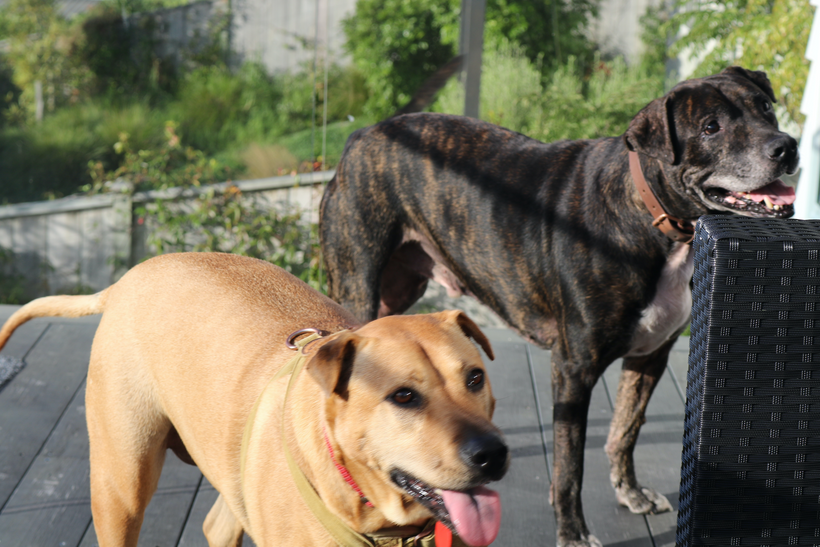 Sorry it took me a while to release the scripts so the reading stage could begin.  The past 24 hours has been somewhat of a disaster for us here at home (trust me, you don’t want the details of today triple disaster!), and as a result I just haven’t spent much time at the computer.  But for those of you who aren’t on Discord or following me on Twitter, I want to let you know that we adopted a 2nd dog yesterday as a companion for Diva. His name is Diesel, a 6 year old Staffordshire Bull Terrier, and I’ve included a photo of them together at the bottom of this post!

Back to the Script Contest! We only had 2 scripts submitted when the deadline passed, but I like to have at least 3 scripts to proceed with the contest so I announced an extra 24 hours to submit something. Believe it or not, we have 6 scripts!

It’s now time for everyone to read the scripts and decide which one you want to vote for. The voting poll will last 2 extra days to make up for our late start, so the poll will expire on June 19th.  Before you vote, I want to emphasize a few things to keep in mind:

– You must be a patron to vote. I do this to prevent voting fraud, and to limit people to one vote.  By doing the vote on Patreon, you can’t bypass the security to place multiple votes just by using a VPN or a different browser. It’s limited to 1 vote her Patron account. So if you’re not a patron already, you’re welcome to join any tier (including the cheapest $2 Cover Charge Tier) just to vote this month. However, I’d love to have you in one of the higher reward earning tiers, so read the Tier Descriptions carefully and decide what is best for you.    **You can view a video that explains how my tier’s work here.

– Please read all the scripts before you vote.  It’s not fair to only read 2 scripts and then vote, because you’re giving the other 4 scripts a severe disadvantage, and one of them could have been your favorite.

– Vote for the script you think would make the best audio recording. Why is this important? Well, let’s say for example, that you really love feet, and there is a foot fetish script in the contest.  Don’t simply base your vote on the topic because it’s your favorite, take the time to consider whether that foot fetish script is the best script and would make a good recording. You might find that another script is superior when considered from this angle, even if it’s not your favorite kink.

Important Change This Year: A Free copy of the audio will only be offered to those people who have either submitted a script, or have read the scripts and voted. (The exception to this is the Potluck Tier, because they get every recording I release this month already as their reward).  I made this change to encourage and reward those who take the time to participate.  I hope that you’ll read and vote, but if you don’t have the time or inclination to do so, you’ll still be able to cash in your Patreon audio credits  or buy the audio on Gumroad.

That’s all for now, happy reading!  And meet my lovely furbabies – Diva (left) and Diesel (right):